The mysterious captain of the Windwalker.

A hard man, young, but aged by the wind and sea. Many stories exist about the Stormtamer, and even some of them are true.

It is said he once burned an entire fleet of ships to see what the smoke would do when they got caught in a waterspout.
It is said he built an entire village on the water to house the orphans of the men he’s killed.
It is said he sailed straight into the eye of a maelstrom and came out the other side bone-dry.
It is said of him that he is dashing, daring, cunning and ruthless.
It is said that he worships the god Procan, god of seas, sea life, salt, sea weather, and navigation.

Whatever is said about the man, he keeps a tight crew, with some of his own blood on board. 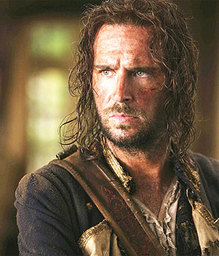