Almach Carr-ai, a human trader from a world covered in sand. He’s an indep, which is why he got arrested. He was hassling a Harmonium officer, when disguised as an old man, and he got arrested and taken to Curst, awaiting judgement for his crimes. His amulet allows him to assume the disguise of any man he’s ever seen, but his eyes always show through as being honest.

His ordinary appearance is that of a sand-merchant, tan skin, dark eyes, wrapped in black cloth. He’s a thief, smuggler and a merchant of some reputation, and is being framed for being Shenvallei’s assistant. He was arrested long before any of this began occurring.

He used to have a happy merchant business, until he attempted to sway his brother’s fanatic religious beliefs. For that, his brother destroyed his home, murdered his family, and forced him to flee his homeland. He has been seeking to prevent that from happening to others ever since. He believes in no specific god, but holds that faith is a good thing, when tempered. In his world, marriage is signified by a ring on the right finger. 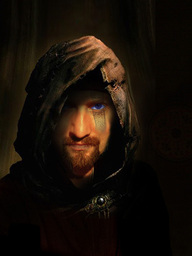